What Is Steam Boiler?

Steam boiler is nothing but a closed vessel combustion chamber which generates steam at a desired pressure by the combustion of fuel to water. Steam is supplied to the steam boiler in differen field like steam engine,steam turbine,thermal power plant,various heating installation process,different cotton mills,sugar factories etc.

Working principle of steam boiler is very very simple. Steam boiler is a cylindrical shape closed vessel which has sufficient capacity to contain water and steam.Generally, water or other fluid is stored in steam boiler to generate steam.This water or fluid is heated by flames or hot gasses which are produced by combustion of fuels and consequently steam is generated in the boiler at different pressure according to boiler's size and it's specification.This steam is now passed through a pipe and supplied into different production unit,power plant etc.This is very basic working principle of steam boiler.

Characteristics of a steam boiler

There are lot of good characteristics required for an ideal steam boiler.But we will describe some important points.

1. It will produce maximum quantity of steam with minimum fuel consumption.

2. It should be light weight and require small space.

3. It can handle any fluctuating load.

4. It should be economical and should require less attention.

5. It should be quick starting.

6. The joint should be few and accessible for inspection.

1. According to the contents in the tube

According to the contents in the tube,steam boiler is two types.

When hot gases and flames are passed through the tubes or multi-tubes which are surrounded by water, is called fire tube or smoke tube boiler.It is very simple small capacity type boiler and is used various industries for it's simplicity. Example:Cochran boiler,Lancashire boiler,Cornish boiler etc. 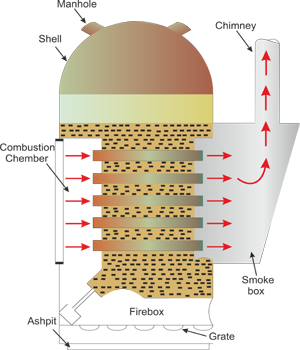 In water tube boiler,water is circulated inside the tubes which are surrounded by flames or hot gases. Example:Babcock and Wilcox boiler,La-mont boiler

2. According to the position of the furnace

3. According to the axis of shell

4. According to no of tables

5. According to the circulation of boiler and steam

6. According to the use

Stationary boiler is fixed boiler and does not move hear and there.It is used in various power plants. Mobile boiler is that kind of boiler which move one place to another.locomotive and marine boiler is mobile boilers.

Efficiency of steam boiler is defined as the ratio of heat utilised by feed water for conservation into steam to the heat released by the complete combustion of the fuel in the same time.This is known as the thermal efficiency of the steam boiler.

In the above equation,

ma = Actual evaporation in kg per kg of fuel burnt.

h1 = Enthalpy of 1 kg of feed water entering the boiler in kJ.

If the boiler is equipped with an economiser and superheater ,then the efficiency is known as the overall efficiency of steam boiler.