1. According to the extent of water flow regulation available:

According to the extent of water flow regulation,hydoelectric power plant may be classified into three categories:

a. Run off river power plants without pondage

b. Run off river power plants with pondage

a. Run off river power plants without pondage

This type of hydroelectric power plant,water is not available all the time. So this type of power station is not suitable for constant steady load. There is no pondage or storage facility available in such type of power plant. Plant is placed in such a area,where water is coming directly from the river or pond. This type of hydroelectric power plant is called run off power plant without pondage. Plant produces hydro electricity only when water is available. This type of plan cannot use all the time.During high flow and low load period,water is wasted and the lean flow periods the plan capacity is very low. Power development capacity of this type of plan is very low and it produces power incidentally. The development cost of such a plant is relatively cheaper than full-time power development hydro electric power plant.Though it is not used for constant steady load supply,it's objective is to generate electricity by using excessive flow of water during flood or rainy season or whatever flow is available to save some sort of our natural resource of energy such as coal etc, diesel etc.

b. Run off river power plants with pondage

This type of plant is used to increase the capacity of pond.The pond is used as a storage water of hydro electric power plant.Increased the pond size means more water is available in the plant,so such type of hydro electric power plant is used fluctuating load period depending on the size of pondage.On a certain limitation,this type of power plant can be a part of load curve and it is more reliable than a hydro plant without pondage.Such type of plant is suitable for both base load or peak load period.During high flow period,this plant is suitable for base load and lean flow period it may be used to supply peak loads only.During high flood period,one thing should keep in mind that flood should not raise tail-race water level.Such types of power plant save conservation of coal.

Most hydroelectric power plant in the world is reservoir power plant.This type of plant,water is stored behind the dam and water is available throughout the year even in dry season.This type of power plant is very efficient and it is used both base and peak load period as per requirement.most importantly,it can also take a part of load curve in grid system.

2.According to the availability of water flow

As per height of water or water head,hydro electric power plant can be divided three categories:

The block diagram of low head hydro electric power plant is given in fig:

Francis,Kaplan or propellor turbines are used for this type of hydro electric power plant.To create a low head ,dam construction is essential.Water resource level i.e.river or pond is placed just behind the dam to create a necessary water head level.Water is led to the turbine through the penstock.This type of hydro plant is located just below the dam and it creates a useful water level as well.No surge tank is required for this plant,dam itself discharge the surplus water from the river.Science head is low,huge amount of water is required for desire output.That's why large diameter and low length pipe is used for this plant.Such types of power plant use low speed and large diameter type generators. 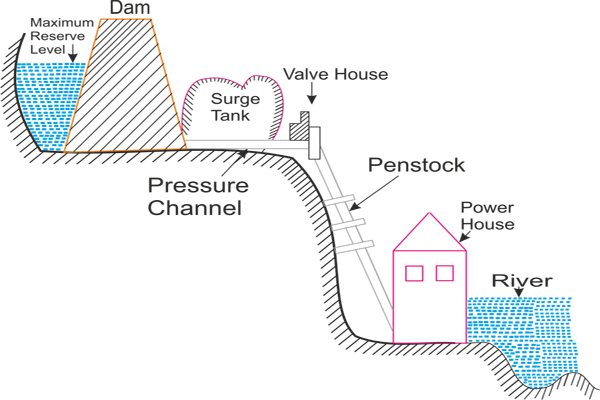 The head of this power plant is more than 300 meters.A dam is constructed such level that maximum reserve water level is formed.A pressure tunnel is constructed which is connected to the valve house.Water is coming from reservoir to valve house via this pressure tunnel and it is the starting of penstock.A surge tank is also constructed before valve house which reduces water hammering to the penstock in case of sudden closing of fixed gates of water turbine.Surge tank also store some extra water which is useful for pick load demand because it will serve extra water to the turbine.Valve house consists of a main valve sluice valves and automatic isolating valves,which operate on bursting of penstock and cut off further supply of water to penstock.The penstock is a connecting pipe which supplies water from valve house to turbine.For high head more than 500 meters,Pelton wheel turbine is used and for lower head Francis turbine is useful.

3.According to the types of load supply

This is a large capacity power plant.This plant work as a base portion of load curve of power system,that's why it is called base load plants.Base load plant is suitable for constant load.load factor of this plant is high and it is performed as a block load.Run off river plants without pondage and reservoir plants are used as base load plants.

This is unique design of peak load plants.Here two types of water pond is used,called upper head water pond and tail water pond.Two water ponds are connected each other by a penstock.Main generating pumping plant is lower end.During the off load period,surplus energy of this plant is utilized to pumping the lower head pond water to upper head pond water.This extra water is used to generate energy at pick load periods.By doing this arrangement,same water is used again and again.Extra water is required only to take care of evaporation and seepage.