੆ IN THIS PAGE ⇒  WHAT IS CARNOT CYCLE? ⇒  WHY CARNOT CYCLE CAN'T BE USED IN ACTUAL PRACTICE?

What is Carnot Cycle?

Carnot cycle is an ideal cycle as adopted for an ideal heat engine.It consists of two isothermal process (expansion and compression) and two adiabetic process (expansion and compression).The cylinder and piston of the engine are considered as perfect non-conductor of heat but the cylinder cover head is a good conductor of heat.The hot body at a higher temperature is brought in contact with the bottom 'B' of the cylinder.The cylinder is fitted with a weightless and a frictionless piston.

The french engineer Nicolas Leonard Sadi Carnot was the first scientist who realize the problem of the efficiency of heat engine and invented the carnot cycle.The pressure-volume (p-v) and temperature-entropy (T-S) graph are shown in the fig. 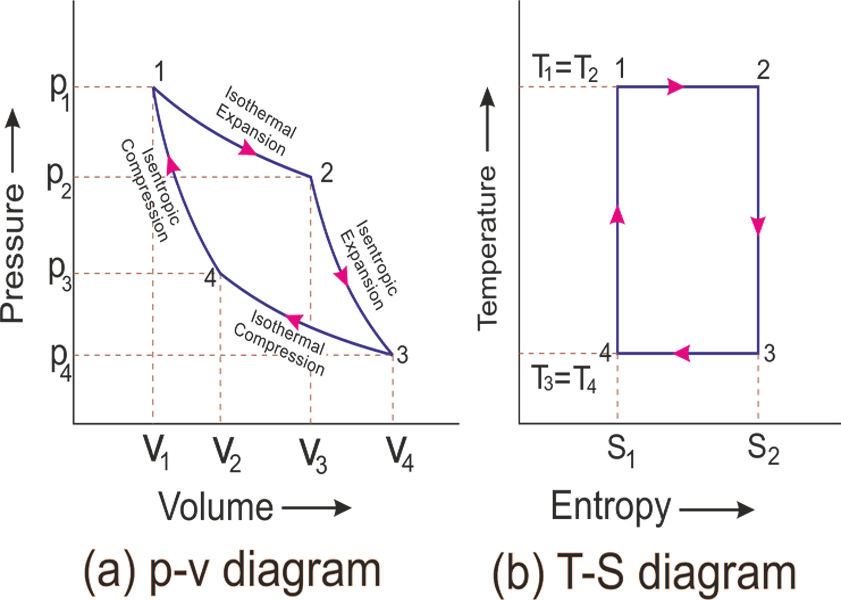 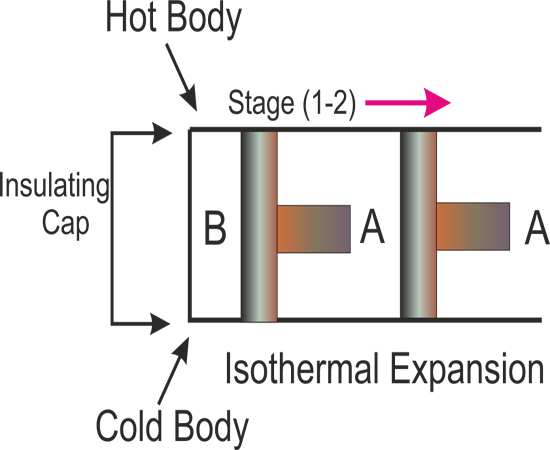 Let,unit mass of perfect gas is admitted into the cylinder at the beginning of the outward moment of the piston and the pressure,temperature,volume of the gas at a point 1 is p1,v1 and T1 respectively.The bottom 'B' of the cylinder can be covered by an insulating cap .During the movement of the piston, the heat Q1 is supplied to the perfect gas and the gas expands isothermally keeping temperature T1 constant until the volume v2 and pressure p2.The heat supplied by the hot body is fully absorbed by the air and is utilised by doing external work.So,heat is supplied during this process is equal to the work done during this process.This isothermal expansion is represented by the curve 1-2 on p-v and T-S diagram.

Since,there is no change of temperature from point 1 to 2,so,(T1=T2) and as per first law of thermodynamics internal energy is also zero (E=0).

Then change of entropy 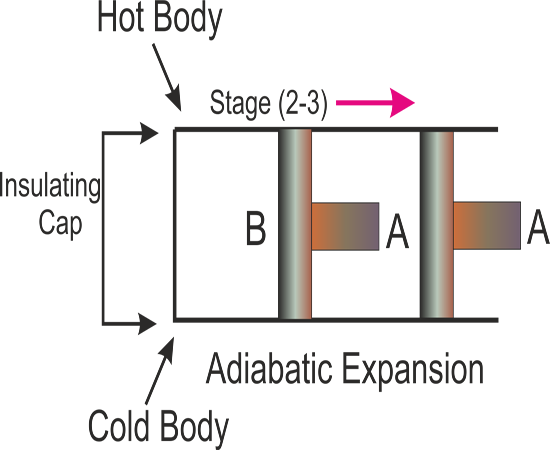 As the piston moves outward,the gas expands adiabatically till the pressure p3,volume v3 and temperature T2 and the hot body is removed from the bottom of the cylinder 'B' and the insulating cap is brought in contact.In this process, there is no interchange of heat of the surrounding gasses (Q = 0)The reversible adiabatic expansion is represented by the curve 2-3 on pv diagram. 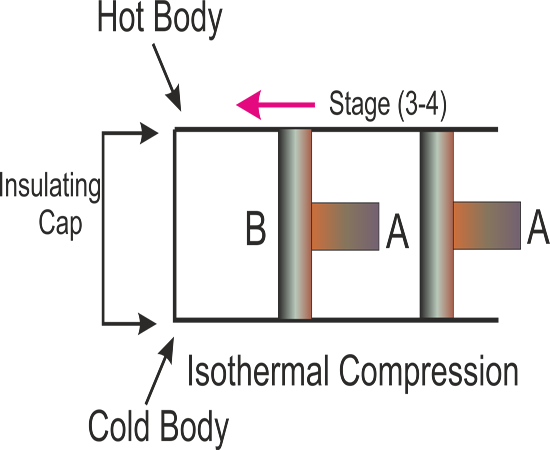 Now the piston moves inward the gas and insulating cap I.C. is also removed from the bottom of the cylinder and bring the cold body in its contact.The air pressure is compressed isothermally keeping temperature constant T3 from v3 to v4.It means at a point 4 temperature T4 is equal T3.That's why heat is rejected to the cold body is equal to the work done on the air.The isothermal compression curve is represented by 3-4 on p-v curve. 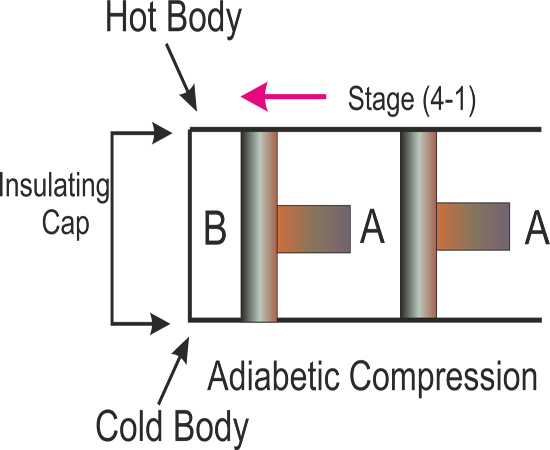 As the piston moves inwards the gas insides the cylinder is compressed adiabatically till the pressure p1,volume v1, and temperature T1 such that the gas returns to its original condition to complete the carnot cycle and insulated cap I.C. is brought in contact with the bottom of the cylinder B.The temperature of air increases from T4 to T1 and not heat is absorbed or rejected by the air.The reversible adiabatic compression is represented by the curve 4-1 on p-v and T-S diagram

So, work done by the air for adiabetic compression

Why carnot cycle can't be used in actual practice?

But during the adiabatic process, the piston moves very fast within the cylinder.So that no time is available for the transfer of heat.

So, sudden change of speed (from low speed to high speed) of the piston is required to make the cycle efficient.But this is not possible due to direction of the cylinder and the piston is none conductor of heat and cover head of the cylinder is good conductor.Again there is a weightless and frictionless piston fitted on a cylinder which is pracically impossible.That's why carnot cycle can not be used in actual practice.