What is Indicator Diagram Of Steam Engine?

1. The steam enters in boiler pressure and released at condenser pressure. 2. The opening and closing steam ports are instantaneous. 3. Steam is hyperbolic at the time of expansion or compression which is pv=c. 4. Steam pressure remains constant at the time of condensation and no wire drawing due to restricted valve opening. 5. The expansion and compression of steam is hyperbolic nature (pv=c).

At a point 1 position, steam enters to the engine cylinder through inlet ports at a constant pressure and piston moves towards the right direction.After that, steam is cut-off at point 2 position, is called cut-off point.

At point 3, inlet steam is released from engine through exhaust ports.As a result pressure in the engine cylinder falls down suddenly without change in volume.So this point is called a release point.

At the point 4 position, piston starts to move in opposite direction and used steam is released through exhaust ports at constant pressure till the Port is closed.At this point steam pressure is called back pressure.

At the point 5 position, inlet ports are open and some steam enters to the engine cylinder without change in volume which increases the steam pressure and again piston moves towards the right position. this process continues till the original position is restored. 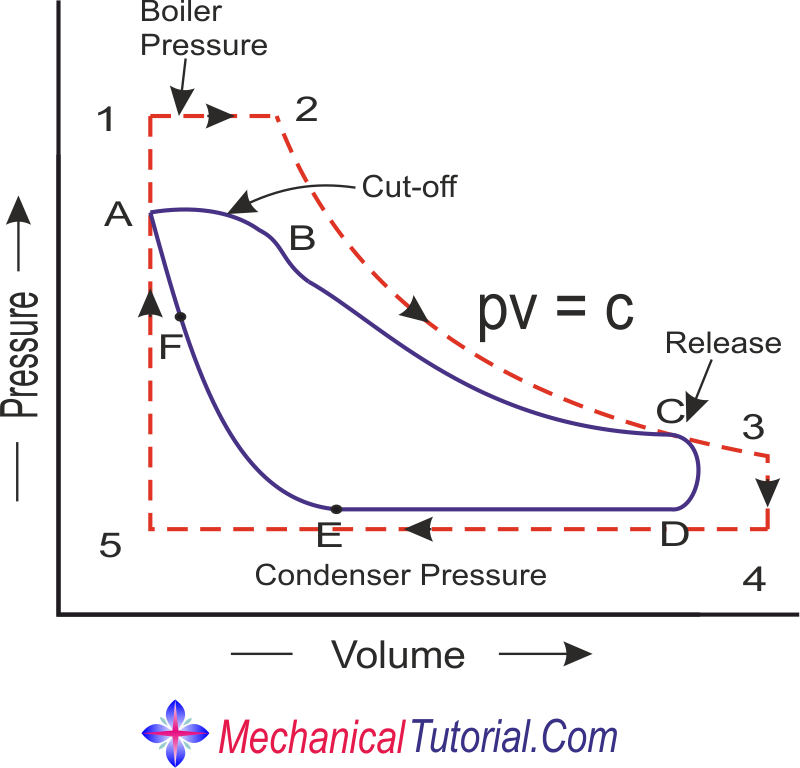 1. When steam enters from boiler to Indian cylinder there is some pressure drop at the steam.That's why, at the beginning of the stroke is less than the boiler pressure. 2. due to the air drawing through the steam ports,forward stroke of the piston is always slightly fallen in pressure shown by the line AB.

3. We can see in the picture that cut-off point B is slightly rounding and it is not same as point 2.because inlet port cannot close instantaneously due to its valve mechanism. 4. Point C position the curve is rounding off.this point the exhaust port opens before the end of the forward stroke. 5. At the point, E position remaining steam in the cylinder is compressed and it goes along through the curve EF before the end of the exhaust stroke.this reduces the wire drawing when the inlet valve opens at F and also reduces initial condensation. 6. Due to wire drawing effect, the steam is admitted just before the end of exhaust stroke at F. For this effect, it decreases the area of indicator diagram and work done by the engine is reduced.the pressure produced by compression up to this point is raised to admission pressure by the time and piston has reached at the end of the exhaust stroke.

Indicator factor defines by the work done per stroke ,

Actual work done per stroke is,

theoritical work done per stroke is,